Television credits include: Witness to the Mob, The Great Gatsby, Earthly Possessions, Amy and Isabelle.

Ilene is a former Vice President of Casting for Walt Disney and Touchstone Pictures. She is a member of The Academy of Motion Picture Arts and Sciences.

Teaching credits, and writing for Backstage

Ilene conducts workshops on acting and auditioning, and coaches privately when her schedule allows. She has taught guest classes and workshops at Montclair University, Hunter College, NYU, One on One NYC, Actors Connection, Mixing Networks (London), Met Film School (London) and the SAG Foundation. 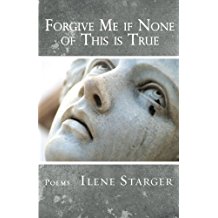 Ilene’s full-length poetry collection, Forgive Me if None of This is True, is available on Amazon. Finishing Line Press published her earlier chapbook, Lethe, Postponed. Her work has also been published in numerous respected poetry journals. Ten of her poems formed the basis of a classical song cycle, Elusive Things, with music composed by Eric Shimelonis. Elusive Things, sung by F. Murray Abraham and played by the musicians of Voice of the City Ensemble, premiered at Weill Recital Hall at Carnegie Hall in 2010.